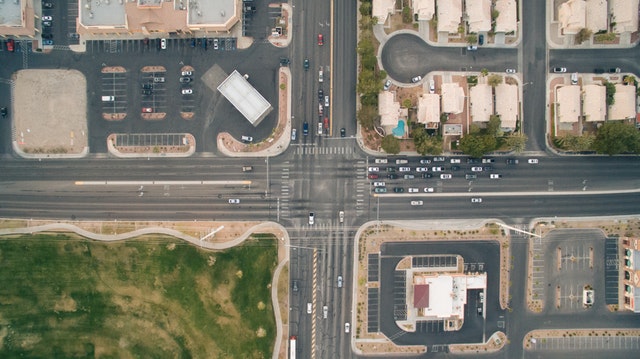 Macroscopic traffic models (strategic models) are made on larger areas (regionally or nationally). Macroscopic models are usually multilevel: modelling of generations and attractions, trip distributions, choice of transport modality and traffic loads and they include personal, public and all types of freight transport.

Macroscopic model results are vehicle flow estimates on the road network, their speed and concentrations on hourly or daily basis.

Mezoscopic traffic models are usually used for urban areas. Their level of accuracy is between macroscopic and microscopic models. They do not include demand modelling; only traffic loads. They describe the road network more in detail and include attributes of crossroads, junctions and road splits. Results of this model are the detailed vehicle flows and speeds on the network estimates like the number vehicles turning left, speeds and delays in crossroads and their dynamics.

Microscopic traffic models enable the most detailed insight into traffic flows on existing and future transport infrastructure. Same as mezoscopic models, they too include only traffic loads for each specific vehicle. Next to classic vehicle modelling this model can also be used for modelling pedestrians in various situations. Physical attributes of transport network are set in detail, which makes it possible to consider traffic from all points of view (cars, trucks, buses, rail, cyclists, pedestrians and traffic signalisation).

The result is a visual traffic simulation with a number of information on network operation (speed, travel times, delays, traffic jams, bottlenecks, number of stops and the dynamics in the crossroads, traffic lights cycles etc.)

New construction: Basis for new crossroad design is a traffic study with a 20-year traffic flow forecast upon which an optimal crossroad type is determined (crossings with or without traffic lights, roundabouts…) and its dimensions (lane width, number, length…).

Reconstruction: is made based on traffic counts and a 20-year traffic flow forecast upon which an optimal type and dimension of the crossroad is determined.

World renowned aaSIDRA Intersection software for independent crossroad design as well as VISSIM are used for the process.

For the needs of studies and research we conduct: